Although there are existing implementations of the classic Snake game (play the game here), I wanted to create my own implementation for a few reasons:

Getting up and running #

Installing and using my code is very simple. Start with cloning my GitHub repository;

Then, run the following:

Now you’re able to use the environment in your Python code like any other Gym environment:

This step is optional, but if you’d like, you can use OpenAI’s Baselines to train from the command line. You can do this with the following:

Now, ensure you have Tensorflow installed

That should set you up with Baselines installed. If you have an error or need more clarification on installation, look on OpenAI’s repository, which I’ve linked just above.

Now we can train an agent in our snake environment with the following command:

A dialogue box with diagnostics should pop up and will update periodically throughout training. It takes about 15 minutes to train on my computer, a Mid-2012 Macbook Pro.

Once training has completed, you can watch your agent playing the game with:

Now that you’re up and running, let’s look at some of the finer points of the code I wrote.

When you are using the multi-agent snake environment, observations will be output as a tuple of tuples. So, you’ll need to make sure to feed each of your agents the appropriate tuple of observations. There are variants of multi-agent snake written with 2, 3, and 10 snakes already. You’ll be able to either use Gym to make one of those pre-built environment configurations, or you can take a look at my code and directly set up your own environment configuration. Each of the 2, 3, and 10 snake variants also have sub-variants; one with one food per snake (so 3 snakes, 3 foods) and one with one food total (so 10 snakes, 1 food). Hopefully the setups with fewer foods than snakes will enable some research into the evolution of competitive behavior between agents when they are placed in every-agent-for-themself type situations.

The code to randomly generate maps isn’t very sophisticated. As such, I don’t recommend placing more obstacles than 1/3rd the size of your longest map side. So, if you’re in a 16 by 16 grid, You probably shouldn’t request more than 5 or 6 obstacles to be placed on the map. But, you only need to worry about this if you’re not using one of the prebuilt configurations. Each of the prebuilts are conservative in the number of obstacles selected in order to avoid any issues popping up.

Well, when setting a really large number of obstacles, I’d end up with pockets of open map space completely encircled by wall and obstacles, so the snake couldn’t get to it. This is an issue because the food placement algorithm randomly places food anywhere that isn’t a wall or a snake, so the food could get placed somewhere that the snake couldn’t reach. Here’s an example of what I’m talking about: 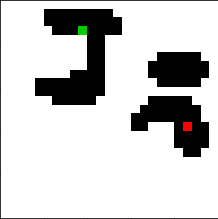 This picture was produced by using a 25 by 25 map and placing 50 obstacles on it. You can actually see here, that the snake (green) is in a completely different pocket of the map than the food (red) and so will never be able to reach the food. Luckily, the map regenerates each episode, but it’s probably still best to avoid this kind of situation during training. It’s still possible for this issue to occur with a smaller number of obstacles, however, I observed that my code was really robust when requesting no more than about a third of the largest side of the map for number of obstacles. So in this case, that would be num_obstacles=8.

If you’re using the small_vector observation setup, it is necessary to use a map with walls. We’ll get into this more now, as we cover different observation types.

This environment has 5 different observation types.

It is necessary to use a map with walls when you’re using the small_vector observation type because the observation is gathered by indexing into the array at each of the 8 squares around the snake’s head. If you do this when there are no walls, you are all but guaranteed to run into an error with the index you’re trying to access being outside of the array. I didn’t write a better fix for this because it didn’t seem very important.

My bit of googling around about reward functions in snake indicates that the typical reward function is +1 for eating food, -1 for dying, and 0 for everything else. This code contains that reward function as default. However, there is a second option. The second reward function implements Potential-Based-Reward-Shaping (PBRS). You can read more about it here, or just doing a google search will turn up some relevant information.

The current PBRS function is very much in beta and is an area of this code that needs to be improved. I’ve run some simple experiments with the current function and haven’t had much luck with learning anything. It’s an area I’ll actively be experimenting with, and, if someone wants to contribute to this code, this would be a simple way to get started. Altering the existing potential based reward function doesn’t require much understanding of how the code works. You’d just need to navigate to gym-snake-rl/gym_snake_rl/core/core_snake.py and edit lines 263 through 269. The current reward function formulation is:

Gamma is a discount factor and is set to 0.99 by default.

In this environment, it is important to be aware that applying reward standardization may yield NaNs and cause errors. It is possible to have an episode or set of episodes where the return is all zeros or all ones. Of course, a vector of all one number has 0 standard deviation, so when you do (returns - mean(returns)) / standard_deviation(returns) that division by zero will produce the NaNs. If you’re using PBRS, this is no longer a concern as you will not have a return vector that is made up entirely of the same number.

I anticipate that when the PBRS function in this code is fixed, it’ll prove helpful in training agents like the one trained on randomly generated maps above to actually go towards the food, instead of getting stuck in any weird behavior loops.

There are a bunch of environments contained in this code, and I’m going to cover the naming convention and list all of their names here.

The structure of environment names follows this structure:

Now for the fun part.

For a full list of names, see the __init__.py file in gym-snake-rl/gym_snakerl/. There is a full list of names, and they all follow the above convention. So, it’s pretty simple to get the environment you want by picking the name from the list, and then subbing it in with the observation type, size, and v0 tags.

Both of these game variants are from here.

I referenced OpenAI’s Baselines for their setup instructions and code running instructions and such. Much of my code was built on top of nicomon24’s code. In fact, my project started off as a clone of his project and then I built the features I wanted to add on top of their code, and in some cases I rewrote the code to work with what I wanted to do.

My creation of this environment was inspired by OpenAI’s work titled Quantifying Generalization in Reinforcement Learning and I wanted to enable people wihout lots of computational power, like myself, to work on things similar to what they did.

If you’ve read for this long, thank you.

Any issues with the code should be opened at the GitHub repository linked towards the start of the blog, and if you write an addition to the code, you should submit a pull request on GitHub. If you have further questions, you can tweet me or email me (jfpettit@gmail.com).

Why I think RL tooling matters

The tools we use influence the research we do, and while there are many good RL tools out there, there are still areas where tools need to be built. For more about topics like this or to read the original article, click here. The RL... Continue →